Last year was a big year for Evonik regarding environmental stewardship as they worked on two major habitat enhancement projects: one for wildlife and one for habitat.

Evonik has built osprey nest platforms, bluebird houses, purple martin houses, and duck boxes in the past. In 2020 they surveyed these houses and realized that many needed to be replaced. Also, during this time, many of their employees were missing their customary volunteer opportunities and employee team-building. Evonik recognized an opportunity to enhance their existing wildlife habitats while also addressing the needs of their employees to work together and give back. 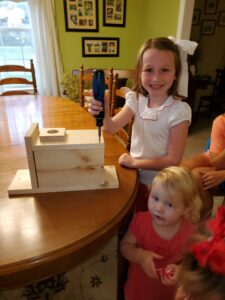 Brian and Chris built 70 bluebird houses and 15 duck house kits and asked employees to take them home to build and bring back completed. “My grandson and I had such a great time building our birdhouse together,” said John Sims, Evonik employee. “I hope we can continue to get families involved in projects like this.” After completing the Evonik birdhouse project, John and his family built several more for their yard. The family has enjoyed watching the birds from their back porch.

An employee picked up each birdhouse kit, assembled with their family, and then Evonik installed all of them in time for nesting season in the spring of this year. Evonik has continued to monitor the houses to see if they are being used by wildlife. Approximately 75% have been used this year and they hope all of the remaining birdhouses will be utilized by next year’s nesting season. 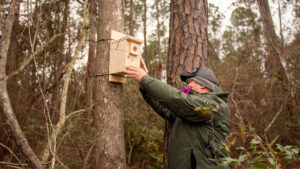 For the second project in 2020, the Evonik team targeted nearly 12 acres of “low quality” Wet Pine Flats land for restoration. Evonik has had an active plant wildlife project since 2014. In the last seven years, they have removed trees and shrubs, performed controlled burns, planted thousands of native plant species, reduced exotic species and much more on the land.

Evonik has contracted with Barry A Vittor and Associates to evaluate the strength and success of the project. They use a measuring tool called the Functional Capacity Index (FCI) which is determined through sampling and is derived from the following indicators:

While the COVID-19 pandemic hit their team hard with respect to limiting employee activities, volunteer opportunities and community event participation, they chose to make lemonade out of lemons. These projects allowed their team members and their families to work alongside each other to better our coastal environment while remaining healthy and safe.