Commander Pete Riehm, USN (Ret.) was stationed in Mobile on the USS FLATLEY(FFG21) from 1992-93. His last tour of duty was as Commanding Officer, Navy and Marine Corps Reserve Center in Mobile, Alabama from 2002-2005. Riehm is a Commercial Real Estate broker and partner in CRE Mobile, formerly known as NAI. Riehm has been a member of PEP for many years.

Captain Bill Pfister, USN (Ret.), President, Mobile Council, U.S. Navy League, is a native of New York and a graduate of the U.S. Naval Academy in Annapolis, MD. He holds an MS in Naval Architecture and Marine Engineering from MIT. After 30 years in uniform, Pfister retired to the Gulf Coast to work in the shipbuilding industry.  An Australian shipbuilder approached him to set up a shipyard for building commercial ships and ultimately ships for the Defense Department. After investigating several locations, he established Austal USA on a green-field site in Mobile. The venture was successful, and Austal is today the 5th largest shipyard in the U.S., the largest aluminum shipyard globally, and employs over 4,000 people. Pfiser is a former member of the PEP Board of Directors and the current President of the Mobile Council of the Navy League of the U.S. 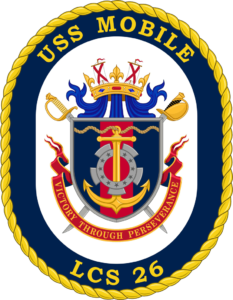 Commissioning a U. S. warship is the most significant event in the life of the ship and has been a tradition since 1775. Before 1984, Commissionings were conducted in building yards but moved to public spaces so a boader range of Americans could see their Naval traditions. The U.S. Navy, Navy League, and local communities become strategic partners in the planning and execution of commissioning ceremonies to ensure the events receive the proper attention and all citizens have the opportunity to participate. The Navy hopes these public events help foster better understanding and support for the ship’s mission and the contributions of our armed services. The Navy also hopes the public ceremonies increase recruiting, retention and create public relations opportunities.

Commander Riehm explained Austal is building the USS MOBILE (LCS26) and will be commissioned on May 22, 2021, as the fifth ship to carry the name, Mobile. “It’s very exciting for our city that this Navy warship will carry our name around the world for at least 30 years,” said Commander Riehm. “While this is a great honor for our community, we have a unique opportunity to imbue our namesake ship with our spirit, so we want the whole community to give the USS MOBILE the best and most uniquely ‘south Alabama’ commissioning possible as we send her to the fleet.”

How You Can Support the USS Mobile (LCS-26) Commissioning

If you are interested in becoming a sponsor of the commissioning of the future USS MOBILE (LCS 26), check out your options here, or you can simply send an email to info@ussmobilecommissioning.org by April 15. Sponsors can score some great swag, including Surface Warfare Officer leather jackets, honorary plankowner ball caps, and invitations to various events.

“If you or your family have not attended a U.S. Navy Commissioning ceremony, it is worth the trip,” said Judy Adams, Vice President of Internal/External Affairs, Alabama State Port Authority. “The U.S. Navy puts on quite the exhibition of military precision and discipline.  And, as an American, I can’t help but feel a sense of pride when I see our young men and women enthusiastically embrace the ship and their public service to defend our nation.”

Save the date for these upcoming PEP events!