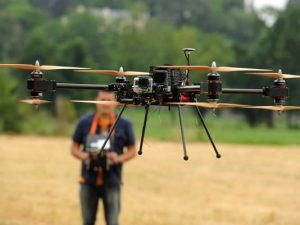 In addition to saving time and money, industrial applications of Unmanned Aerial Vehicle Systems, or drones, can save lives, prevent injuries and protect natural resources according to the speakers at an October 20th seminar sponsored by Partners for Environmental Progress. Entitled “Unmanned Aerial Vehicles/Systems: Innovation, Security, and Compliance,” the seminar was part of PEP’s 16th Annual Industrial Reverse Trade Show.

J. Corey Hitchcock, UAS Pilot, Southern Company Services System Air. Hitchcock said that drones are opening up new opportunities for utility companies to improve safety and reliability, reduce costs and create better ways to serve customers. Southern Company began investigating the use of drones in early 2015 and was one of the first U.S. utilities to receive Federal Aviation Administration (FAA) approval to pilot these systems.

One way that drones are proving to be especially effective is in assessing damages after a storm, especially in remote areas that become 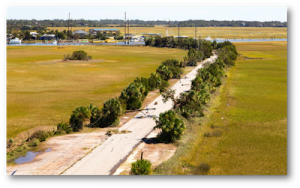 inaccessible following a storm. After Hurricane Matthew struck the southeastern United States in October, drone missions were flown over utility company right-of-ways to determine where trees and debris needed to be cleared to reach the sources of power outages. “We can’t re-energize an area if there are live wires on the ground or trees laying on power lines,” Hitchcock said. “The drones allow us to find these problems without endangering workers and to restore power more quickly and efficiently.”

He said a drone flown over Tybee Island, off the coast of Savannah, Ga., in the wake of Hurricane Matthew allowed utility workers to find the problems and send line workers to make repairs before residents returned to the island. “Before transmission lines are grounded, it’s unsafe to get down on the road,” Hitchcock said. “Now we are able to get pictures with these (drone) devices that give us the specific information for crews to make the necessary repairs.” 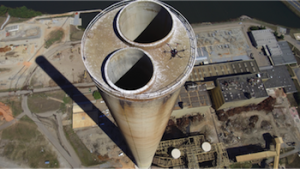 Drones are also proving to be a cost-effective alternative for more routine work projects, such as inspecting transmission lines and towers and performing volumetric studies of coal piles and other utility assets. In the past, said Hitchcock, these tasks were carried out with manned aircraft, which was much more costly than using drones.

Dan Vaughan, Owner, Drone Worx, who also spoke at the seminar, added that drones can help industrial plant operators understand what is happening at their facilities and be pro-active about dealing with problems. “Drones can help with inspecting towers, tanks, roofs and other parts of plant structures,” he said. “There is a lot of equipment, such as cable trays and piping devices that aren’t very accessible, but drones can come in and inspect them.”

Other important tasks that drones can perform are related to environmental protection. Hitchcock said drones are being used to measure emissions from power plants and to survey rivers and reservoirs for algal blooms.

Vaughan said that air quality monitoring has big potential applications for drones, because drones can take real-time samples and quickly send them to labs for assessment.

Additionally, Hitchcock said, drones can help protect endangered species. Southern Company has used drones to inspect osprey and eagle nests atop transmission towers to determine if the nests were active before starting construction and maintenance work.

Predicting that drones will continue to become more cost-efficient and innovative, Hitchcock said he expects development of drones that will live inside of substations, where they could monitor what is happening and be launched if there are problems. Additionally, he anticipates the development of high-altitude drones that can be launched before a hurricane and provide immediate information about damages that have occurred, allowing for faster response and repairs.

Alongside all the positive developments surrounding drones, the use of unmanned aerial devices raises questions about their safety and security. Brian Martin, Special Agent and Weapons of Mass Destruction Coordinator, FBI, explained that the FBI and other government agencies have to obtain court orders to use drones for surveillance, under the fourth amendment of the Constitution. He said that drones have been rarely used for this purpose, citing a kidnapping incident and another hostage-taking incident as two occurrences of the FBI using drones for surveillance.

At the same time, he said that U.S. intelligence and law enforcement agencies are working to stay ahead of “nefarious use of drones,” explaining that these devices have been used for drug smuggling across borders, and they have the potential to carry explosives, chemical and biological weapons. He urged drone manufacturers and sellers to be on guard for people seeking to buy these devices who arouse suspicion.

Martin also said that the FBI has a number of defenses against drones, such as geo-fencing, signal-jamming, lasers, nets and other classified actions. “There are many good uses of drones, but we need to be aware of their potential for harm and report any suspicious or unauthorized usage,” he said.

Neil C. Johnston (Sr.), Esq., Partner, Hand Arendall LLC and PEP Board Member, provided updates on the growing market of public and individual use (and misuse) of small drones; the FAA’s new small UAS commercial operating regulations (Part 107); and other new legal developments regarding data collection and ownership, contractual issues, airspace, insurance, compliance and enforcement. Johnston explained that any drone weighing from a half of a pound to 55 pounds is regulated, and you must follow proper protocol for usage. He urged attendees interested in using drones for business to consult with a lawyer before doing so.

Thank you to our Drone Seminar Presenters